Put on your shades and shorts and head to Peddler’s Village this summer for tons of beach-themed fun! In May, we’ll be celebrating Strawberry Month as well as the debut of a summer blockbuster event featuring master sand artists at work as they create large sand sculptures throughout the property. Come watch internationally renowned sand artist teams at work! 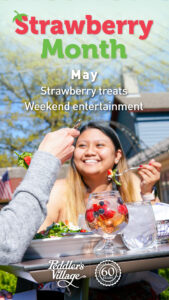 Starting on May 21 (weather permitting), Peddler’s Village guests will have the opportunity to watch sand sculpting teams in turn as they create magnificent sand sculptures on the property. The creation phase will span a total of three weeks, with staggered schedules for the sculptors. The four sculptor teams involved in the project will be: the Sand Sculpture Company, led by Ted Seibert; Team Sandtastic; Sand Pounders, led by Chuck Feld; and John Gowdy and Laura Gowdy.

Starting on June 8 and continuing through August 31, Bucks County Beach Days: Sand Sculptures in the Village will showcase six 12-foot-tall sculptures and two smaller ones created by four world-renowned master sand sculptors. The spectacular sculptures, all of which are due to be completed by June 8 (weather depending), will pay homage to Bucks County’s rich history, landmarks, and scenery. Sandboxes designed for family play will also be placed throughout the property. The event is one of many– including free giveaways all year long and a 60s-style dance party in June–scheduled during Peddler’s Village’s celebratory 60th anniversary year.

The finished sculptures will showcase numerous Bucks County landmarks and themes, including Peddler’s Village, Washington’s Crossing Historic Park, covered bridges, Fonthill Castle, and the Bucks County Playhouse, among others. Visitors who come to the Peddler’s Village sand sculpture show are encouraged to visit these and other nearby attractions as well. Financial support for Bucks County Beach Days: Sand Sculptures in the Village is provided by Visit Bucks County.*

This is not the first time Peddler’s Village has been adorned with larger-than-life sand art; large sand pieces were periodically created on the property in the 1990s, capturing regional attention and drawing many thousands of viewers. Two of the teams that were directly involved in those projects are returning to Peddler’s Village this summer after the decades-long hiatus: Ted Seibert, who was selected by founder Earl Jamison to create sand sculptures in celebration of the 30th anniversary in 1992, and Team Sandtastic, who created a series of whimsical sand sculptures from 1997 through 1999. 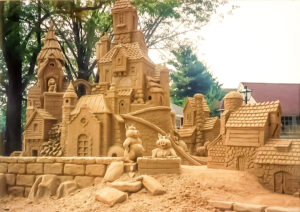 “We wanted to commemorate our 60th anniversary not only by celebrating the history and success of Peddler’s Village, but also by recognizing some of the many other historical and cultural treasures of Bucks County,” said Bob McGowan, chief operating officer of Peddler’s Village. “Through this major, free event and our close partnership with Visit Bucks County, we hope to attract many new and returning visitors, including families, to see these remarkable sculptures as well as the incredible and fascinating landmarks that surround us.”

Patrick Harsch of Team Sandtastic said he is glad to return to Peddler’s Village, which played a key role in launching his professional career. “I look forward to returning to the first place I was ever left alone with a huge pile of sand and time,” he said. “Projects like the one at Peddler’s Village helped me decide to be a full-time sand carver.”

Ted Seibert of the Sand Sculpture Company, who grew up in the Pacific Northwest, recalled his introduction to Peddler’s Village in the 1990s. “It was one of those magical places you get to visit and never forget the charm and the beauty,” he said. “To be able to visit Bucks County and know some of the history of the area was another big plus that made Peddler’s Village one of the most enjoyable places I have personally ever worked. I am just thrilled to be coming back some twenty years later.”

*Bucks County Beach Days: Sand Sculptures in the Village is funded in part by Visit Bucks County, the official tourism promotion agency for Bucks County, PA, through its Bucks County Tourism Grant Program in partnership with the County of Bucks.